Leap Year Sale! One Day Only! 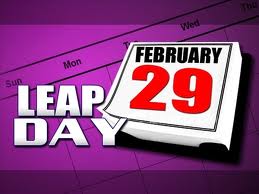 Today is February 29th, a day that only happens once every four years. Sunshine Daydream is going to make the most of this extra day by having a "Once Every 4 Years Sale"! Save 29% on EVERYTHING  in our store. This special sale lasts one day only and is valid on our website or in our store in suburban Chicago. Ordering on the web? Use promotion code "leap" at checkout and you'll save 29% on your order. Want to shop at our store in person today? We're open from Noonish - 9pm, so take a leap over to us and save big!

Posted by Unknown at 9:53 AM No comments: 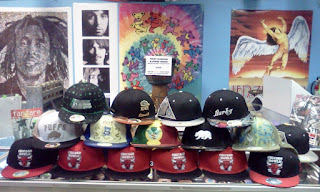 Finally! After many months of hearing about Grassroots and  having  different pholks come into the shop and tell me to carry Grassroots of California Hats, I decided to check'em out. These guys are the shit and so are their lids. Most of them are produced in a limited quantity of only 420 and the designs and quality are just  incredible. Whats even better is that these guys donate a percentage of their profits to many worthy causes. Whether or not you are familiar with Grassroots of Californina, come on down to Sunshine Daydream, and check out our new shipment of Grassroots hats. We have 11 different designs to choose from.
Posted by Unknown at 8:10 PM No comments:

GOING OUT OF cd BUSINESS SALE 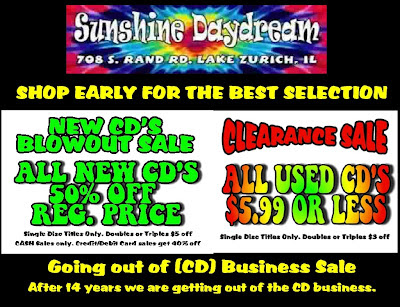 Due to the economy, big box stores, and technology, after 14 years of selling new and used CD's, Sunshine Daydream is getting out of the CD business. It's just not a sustainable way to make money anymore. So - we are getting rid of all of our CD's. New & Used CD's at cheap blowout prices. Used CD's as low as $5.99 and New CD's as low as $6.50 . We're not talking about crap bands or ones that you never have heard of. We have some of the most popular artists in stock and some hidden gems as well.


This is a great chance to pick up some great CD's at cheap prices. Used Pink Floyd CD's only $5.99. New Widespread Panic CD's as low as $7.00. Shop soon for the best selection. We're open 7 days a week.
Posted by Unknown at 1:35 PM No comments: 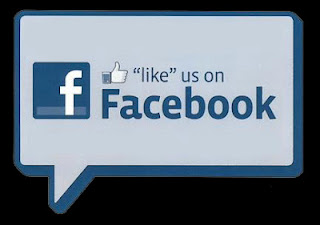 Check out our Facebook page for all the latest news about Sunshine Daydream, including new product announcements, special offers, discounts, and contests too. It's the first place where we post all the good stuff.
We like you - So come on and "like" us on Facebook.
Posted by Unknown at 1:51 PM No comments: