Here's how it works: Each day, go to our website and find something you wish to find under your tree. It can be anything we sell. Tie Dye, stickers, tapestries, incense, if we sell it on our website, you could win it. Post what you wish for on our facebook page with a link to the item on our website, and each day starting today at 11:00pm, we will pick someone and they will win their wish.

Now the fine print: You must be a fan of our facebook page to win. Each day you must pick something different and post it to our facebook page. You can only win 1 time during the whole contest. Make your wishes reasonable. The economy sux and I am not giving away $50 hoodies for 12 days straight. I might for 1 or 2 days though. If you win, you can pick your prize up at our store. If you’re not local, we'll ship it to you. No purchase required. The head hippie decides all winners.﻿
﻿
Happy Holidaze!
Posted by Unknown at 12:12 PM No comments:

'Twas The Night Before A Dead Show... 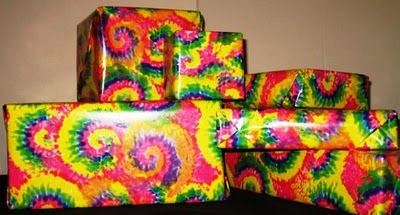 If you want to have the best gifts and the coolest looking ones under the tree, then pay a visit to Sunshine Daydream Chicago Hippie Shop in Lake Zurich, Illinois.

We have all kinds of fun gifts for people of all ages including a huge selection of Grateful Dead goodies. We have CD's & DVD's  by your favorite jambands, Incense, Posters, T-Shirts, and lots more. Looking for tie dye? We carry  all sizes from 6 months - 5X-Large, and we'll give you some free Tie-dye wrapping paper too. Open till 7 tonight and 11 - 6 tomorrow. Open early (well, earlier than usual) till late during the week. For you last minute types, we'll even be open on Christmas Eve from 9am - 3pm.

Posted by Unknown at 2:47 PM No comments:

There is still time to get your holiday gifts and have them in time for Chanukah or Christmas. Today is the last day for standard ground shipping.
After today, orders will have to go Priority to make it in time. In stock orders placed by 3pm Central, will ship the same day. We're located in the Chicago area, and can get your order to you quicker than the other guys. Priority shipping and our Midwest location, put us on either coast in just a few days.

The elves at Sunshine Daydream are working day and night to get your orders out, but the sooner you order, the better. Supplies of many items in our web store are limited this year, and once we run out, that's it until after the new year.

Be sure and check your spam or junk folder in your email program. Our order confirmation emails often end up there. You can also add us to your safe senders list and that will solve the problem.

We use the U.S. Postal Service  (for better or worse) to ship orders. Overall, they have been pretty good with our packages. As the clock winds down, Express Mail will be the only option for holiday delivery. They are the only ones who will deliver as late as Christmas Eve.

Posted by Unknown at 5:32 PM No comments: 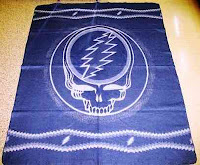 Just in the St. Nick of time!

One final shipment of the Grateful Dead Alpaca Hoodies have arrived. We even got a few Grateful Dead Alpaca Blankets in this shipment. They look just as cool as the hoodies and are made from the same super soft alpaca wool. With Christmas just around the corner and Chanukah starting even sooner, either one of these would make a great gift for your favorite deadhead this holiday season. If you hurry and place your order, we'll get it right out to you in time for the holidays. If you live in the Chicago area, drop into our shop in suburban Lake Zurich and grab one before we run out. We're open till 9pm during the week and 7pm on the weekend. We will also be open till 10pm next week and will be open on Christmas Eve till 3pm.

Posted by Unknown at 7:31 PM No comments: 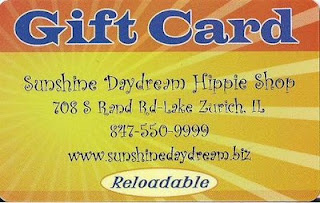 Gift Cards are a great choice when you don't know what to get for that someone special. They make the perfect gift for friends & family as well as an excellent way to thank clients or reward employees and your co-workers. Our gift cards can be applied towards the purchase of anything that we sell in our retail shop or our online store and are available in various amounts (Custom amounts available on request).

Sunshine Daydream gift cards can be used in our shop or online to by any of the 100's of different Grateful Dead Goodies, Posters, Tapestries, Beatles, Dave Matthews Band, Phish, Widespread Panic, Jimi Hendrix band merchandise, or any of the bright and colorful Tie Dye wear that we sell.
For that super special someone, we have the MEGA GIFT CARD  in the amount of $10,000.00 . Order one of these babies and we will throw in a FREE $1000.00 gift card for you or to give away as a gift.

Our gift cards NEVER expire, and there is no fee if you don't use it for a while, unlike many other gift cards. So if you don't what to get someone on your list, a Sunshine Daydream Gift Card is the way to go!

Sunshine Daydream is getting more Grateful Dead Alpaca Hoodies just in time for Christmas! We have one more shipment due to arrive on Tuesday 12/13/11. I am not sure of what colors, but we will have them in sizes Medium - 2XLarge. You will be able to order them on Tuesday and all orders placed by 3pm central will ship that day. If you are local, and want to come in and get one, call us (847-550-9999) on Tuesday to check and see if we have your size & color in stock. We will hold it for you up to 48 hours.

Don't wait if you want one of these. They were sold on the most recent Furthur tour and are now very hard to find, but we got lucky and scored some! After we sell out of these I am not sure when we will get more. Our Grateful Dead Alpaca Hoodies are made in Ecuador and are super warm and comfy and look great. They are the perfect gift for your favorite deadhead.

Posted by Unknown at 7:17 PM No comments: